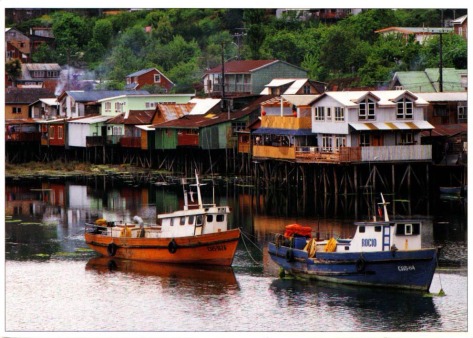 The creation of the world
On Rapa Nui, Easter Island, the story is told that when there was nothing on the earth, everything had yet to be done. Then, an argument arose among the spirits. A powerful spirit that lived in the air imposed his will over the weaker spirits, who had started a rebellion. The powerful one transformed them into mountains and volcanoes. The repentant ones he turned into stars. To inhabit the world, the powerful one transformed a spirit who was his son into a man; he hurled him down to Earth and, upon hitting the ground, the spirit was left dazed. The young man’s mother felt sad and wanted to see him, so she opened a small window in the sky.

Her pale face is sometimes seen, looking through the window. The powerful one took a star and converted it into a woman so that she could accompany his son.To reach the young man, the woman had to walk barefoot, but she didn’t get hurt because the powerful one ordered grass and flowers to grow along her path. She played with the flowers, and every time she touched them, they became birds and butterflies. And the grass that her foot had touched was transformed into a gigantic jungle. The couple met and found that the world was beautiful. In the daytime, the powerful one looked at them through a small round window, and it was the sun. At night, it was the mother who would look through the window, and that was the moon.